The Wearing of Engagement Rings 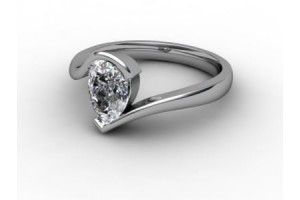 Traditionally, Engagement Rings are worn on the third finger of the left hand (‘the ring finger’). Why? Well, centuries ago, it was believed that the vein originating in the ring finger of the left hand ran directly to the heart. In fact, the Greeks actually called this vein, the vena amoris – vein of love! As it happens, the vein on the same finger on the right hand has the same structure and in countries such as Germany, India, Russia and Norway, Engagement Rings are worn on this hand.

Whilst the wearing of Engagement Rings also following tradition, has fallen virtually exclusively to ladies in the past, it is becoming more popular for men to have them as well, in fact it is often the norm for Scandinavians. However, fifty percent of all of the money spent on Engagement Rings is done so in the USA, mainly because it is such a huge country in the first place.

Tradition therefore is clearly still the key to the wearing of Diamond Engagement Rings and traditional 'cuts' also remain at the forefront of design, the most popular include the Emerald-Cut, with its classically elegant, elongated shape giving the stone the hint of a trendy vintage feel coupled with a modern radiant look. An Emerald-Cut Diamond will usually appear larger than other cuts of the same weight. The Cushion-Cut stone also resonates antique qualities and with its larger facets will radiate brilliance. Pear-shape Diamonds have enjoyed resurgence in popularity owing to its feminine design and being ideally suited to slightly smaller weight stones. The Oval-Cut is often now preferred to a round stone and well suited as a sparkling solitaire, having said that, it is reported that the latest tweaks on tradition include intricate settings, cool cuts and dazzling tints.

At ComparetheDiamond.com (formerly diamondgeezer.com) we cater for all of this and much, much more. Diamond Engagement Rings are, of course, a speciality of the company.