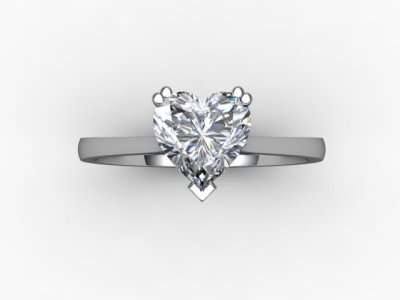 When a couple announces in front of their community, friends and family that that against all the odds, they are going to declare they intend to spend the rest of their lives together, it’s important to get the details right. And by getting the details right I mean you gotta bring the bling. These days it is increasingly common for couples to design their own wedding rings. You don’t have to have a Masters Degree in design or a jeweller’s eye to do it either – there are lots of online sites and services that offer ordinary people the chance to indulge their creative side and create the ring that best symbolises the lifetime commitment that they’re about to make. However, selecting such an important artefact can be a big undertaking and it’s easy to get intimidated by choice.

As you’ve probably already discovered, judging the quality of a diamond is all down to the famous four Cs – cut, colour, clarity and carat. Diamonds are rated from D (the best of the best) down to Z. We’re going to concentrate on cut and style as these are probably the most pressing issues when you’re thinking about your wedding ring aesthetics. Make sure that before you purchase anything, you consult with a qualified jeweller who will give you personalised advice. However, let’s examine one of the most important aspects of ring selection: the cut of the diamond.

What does cut even mean?

Cut is the manner in which the diamond has been shaped. This is the only aspect of the stone that is not defined by nature. The cut of the diamond is the angle at which the stone’s tiny facets occur and it is this collection of angles that affect how light passes through the stone and make the diamond sparkle. This effect is known as the diamond’s ‘fire’. Obviously the skill of the diamond cutter is paramount here so be prepared to shop around.

Cut also refers to the diamond’s shape and it is worth learning about the multitude of different styles on offer. These include:

So named because this cutting technique was first developed for the eponymous green stone. The shape, most often a chunky soft rectangle, is a little less traditional than the round cut and its long lines mean it gives off dramatic flashes of light, instead of the more fiery sparkles. beyonce’s got one, if that gives you any indication.

This cut has the best anecdote attached as it was developed at the behest of King Louis XIV who asked that a diamond be cut to reflect the shape and sparkle of the Marquise de Pompadour’s smile. In actuality, the cut tends to resemble a slightly compressed lemon, which serves to complement and elongate the shape of the finger.

There’s a lyric in the underrated Broadway musical version of Legally Blonde that goes: “Four carats/A Princess cut/Are you psyched or what?” and indeed this sums up a lot of women’s feelings on this particular style. The Princess cut, which came to prominence during the 1960s, is second only in popularity to the round brilliant style and is characterised by its square shape and side-on view which looks like an inverted pyramid. It is very sparkly, with much in the way of fire, which probably accounts for its popularity.

The Asscher Cut This square cut style was developed in 1902 by the Asscher brothers in Holland and is quite similar to the Emerald cut with its cropped corners. If your intended is a Sex In The City fan then it might be as well to drop into conversation that this was the style of ring that Aidan gave Carrie. This will either earn you points or send her careening back into the hands of her millionaire corporate ex-boyfriend, it could go either way.

Heart Shaped CutFor the more openly sentimental amongst us, the heart shaped cut is an excellent choice. Here, the quality of the cut is all important as the diamond is literally shaped into a love heart. It is quite difficult to buy this style online so if you do find somewhere on the web, make sure that their returns policy will allow you to send the diamond back if you’re not happy with the workmanship.

As with any important decision made in a relationship, it’s important that you listen to both your intuition and your partner’s needs. Armed with this information, you can shop with confidence and bring home the sparkler of your dreams. Good luck!

Gabriella Chilton is a wedding blogger who favours a classic oval cut diamond from ComparetheDiamond.com formerly diamondgeezer.com. Just putting that out there.