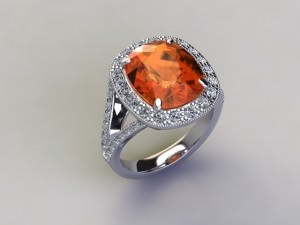 Witches, ghosts, skulls, pumpkins and all things spooky may be what you associate with All Hallow’s Evening these days however Halloween as it is most commonly called had a much more spiritual beginning. The holiday which happens on the 31st of October originated from the celebration of Samhain which marked the end of the harvest and the beginning of Winter. This changing of state was believed to have magical properties and created an opening for the spirits of those that had passed away to travel amongst the living once more. Many used the holiday to honour the dead through sacrificing food and lighting bonfires. Good spirits were not the only ones allowed to roam free on this night, many would wear masks and carve scary faces into pumpkins in order to scare off evil spirits. Many of these practices evolved into the modern day traditions and associations we see today.

It is thought that the iconic Halloween pumpkin was the namesake of the largest and rarest cushion shaped fancy vivid orange diamond in existence at that time. The Pumpkin Diamond weighed 5. 54 carats and was purchased by Ronald Winston of the House of Harry Winston for $1. 3 million. It was worn in a ring by Film actress Halle Berry when she won an Oscar for her role in Monster’s Ball in 2002.

If you would like to sparkle in orange this Halloween here’s a couple we at www.diamondgeezer.com created earlier. An exquisitepavé set split band with a golden citrines and stunning platinum eternity ring with round brilliant cut orange sapphires and diamonds.