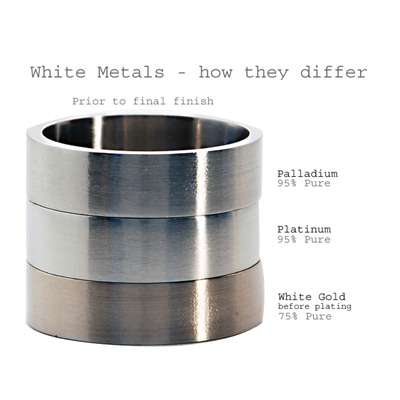 Because we are the manufacturers of what we sell we are able to offer a bespoke service and make your diamond ring, wedding ring or eternity ring in palladium as an alternative to white gold?

ABOUT PALLADIUM A rare and lustrous silvery-white metal that was discovered in 1803 by William Hyde Wollaston, who named it palladium after the asteroid Pallas. Palladium has been used as a precious metal in jewellery since 1939, as an alternative to white gold. Its naturally white properties mean no need for rhodium plating. It is a little greyer than Platinum but with the ComparetheDiamond.com (formerly diamondgeezer.com) mirror polish its very difficult to discern any difference. Palladium is also lighter and about 12% harder than platinum. 950 Palladium is more durable than white gold. Wear testing has shown a 15% longer wear ratio. Like platinum, it will develop a milky patina over time which many like. Over time palladium will show the signs of everyday wear, but the surface is easily restored to the original lustre by cleaning and polishing, a service we are happy to provide. ABOUT PALLADIUM Given its precious, noble metal status and our complete enthusiasm for the material ComparetheDiamond.com (formerly diamondgeezer.com) are champions of palladium and supported the move to make it a legal requirement, as with platinum, gold and silver to have it hallmarked. This legislation became law in 2010, which means all palladium requires to be hallmarked.