How to propose to people who hate weddings 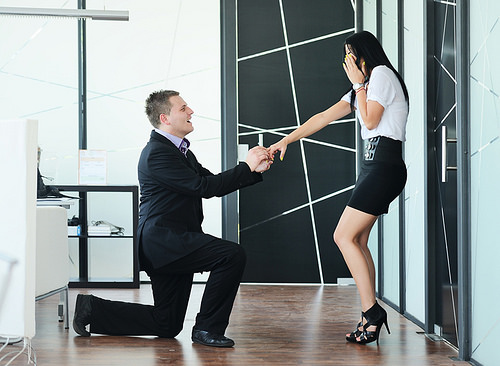 I’m not a big marriage nerd. Don’t get me wrong, I’ve got female friends that are, and these friends tell me wistfully about how they spent their childhood planning their dream wedding: the church, the white dress, the doves at released just the right moment, the first dance, the tasteful kiss at the altar (five seconds, tongue tip only) the cake the cake the cake.

Actually, I have planned my cake. It’s the traditional fruit, heavy on the brandy – ideally, you should be unable to drive after three bites. You should be legally dead after two slices.

But that is by the by. My point is that there are a lot of people, of all genders, who have carefully curated their ideal marriage scenario long before they meet the person with whom they fall in love. This begins, of course, with the proposal. Frankly, the people who have had every detail planned out since childhood are the easiest to deal with – they are often the obsessive-compulsive Type A types who will tell you exactly how events should proceed. They know exactly where and when and what manner of engagement ring they want to find when they get there. Sure, it loses a little spontaneity but at least there’s a protocol involved. In fact, for those without a clue, it’s often the proposal that’s the most terrifying part of the whole enterprise, especially when when the object of your affection has displayed a level of wedding-based ambivalence or even outright disdain. These are the wedding refusers, the cynics and the shrinking violets. These people are nightmares to propose to. So what should one do in order to win their hand? Well, follow this handy checklist and you should be able to, in the parlance of the day, lock this down.

Youtube is full to bursting with amateur filmmakers, bloggers, animators and miscellaneous creative types who have made it their business to make their proposal a performative event. There are many ways to do this, from fake movie trailer to the classic major sporting event half time scenario. This example is has been watched over 21, 000, 000 times and features an elaborate fake movie trailer that plays as unsuspecting bride-to-be watches it in a cinema. Then, in an act of multimedia trickery, her fiancé to be bursts through the cinema doors, wedding rings in tow. It’s incredibly intricate and unabashedly sentimental and if your significant other is moved by grand gestures and you have a rudimentary understanding of Final Cut Pro, then this is certainly a route worth considering.

* Spelling the question out in light, exhaust, icing or weedkiller.

– It should be noted that it’s extremely important that you use the correct tool for the job, that health and safety are foremost in your mind: keep a fire extinguisher nearby, the plane in the sky, the icing at a cool temperature, the weedkiller away from the cake.

* Hiding the ring in something edible

And being really vigilant. I’ve seen too many humorous real-life Xrays to not give this advice.

Both in person and the youtube watchers of the future. Take the ‘movie trailer’ proposal. Yes, 21 million viewers is nothing to sniff at, but consider the parable of the guy in the background The cinema is sparsely populated but there’s clearly a strong contingent of people who don’t know the happy couple at all. They are given voice by the single guy in the red t-shirt in the background of the frame. As the groom gets down on one knee, single guy fiddles with his popcorn, glances back and forth nervously, projecting not so much the wholehearted support of love’s young dream as much as the fervent hope that he’ll get to watch the damn movie before that liquidised yellow goo they call butter, coagulates into a viscous chemical pool at the bottom of the popcorn box. Ask yourself if you want to be the root cause of a stranger’s disgusting chemical goo. If you find that the answer is yes, then all power to you. Let me be the first to say Mazel Tov. And down in front.